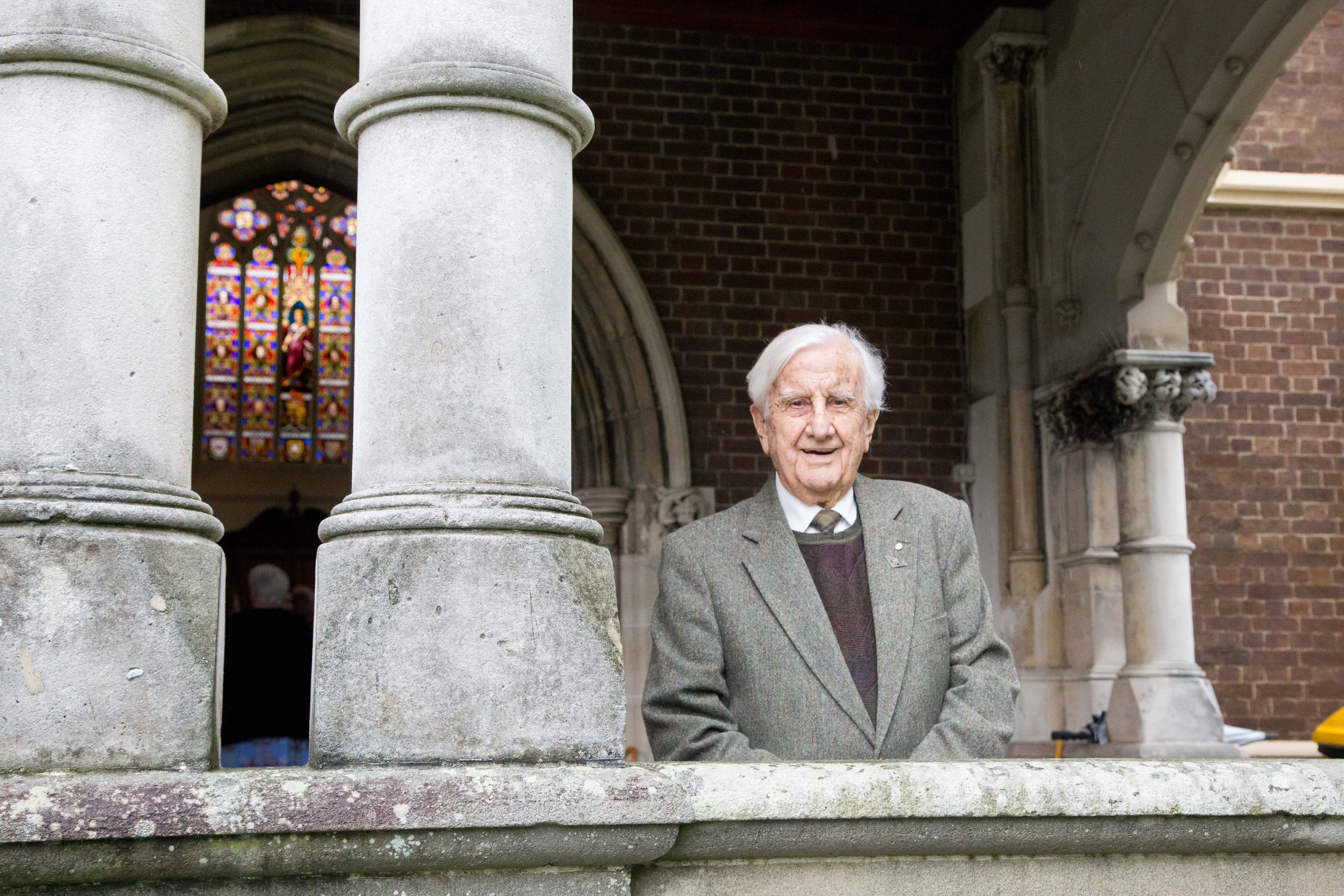 99 years and not a day wasted

Born in February 1920, Dr John Stanton Davis Mellick OAM has the honour of being Brisbane Grammar School’s oldest Old Boy, and his visit to the School for the Great Hall Society’s Long Lunch in June 2019 showed he’s still going strong.

His secret? “Well, if you put the foolhardy drinking of youth away, moderation in liquor intake. Respect your liver,” Mellick said. “That’s where a lot of people get knocked.”

He also maintains an exercise regime he developed almost 60 years ago. “When I was 40 I had a kidney stone, and a doctor friend said if I ran on the spot I might get it out, and it worked. When I was running on the spot every morning, 300 times, I thought, ‘Gee, there’s more to this than meets the eye’.”

“I’m lifting my whole body with one leg and then the other leg, and I thought, ‘I’ll add half a dozen really deep breaths, and touch my toes 20 odd times’. And that’s it; four or five minutes of a morning and I’ve done it ever since. It’s very simple and I don’t even have to pay for it!”

Although he left after ‘Junior’ in 1934, Mellick’s memories of his school days are still sharp. He and his younger brother Sidney (known as Oliver) attended BGS after passing the state Scholarship Examination. “It was the height of the Depression and money was scarce. I lived at Dutton Park and well recall the gangs of men working for relief money when Annerley Road was being built,” Mellick said. “The bulk of us left after the Junior Examination and sought jobs. We wanted to go on but couldn’t.”

After turning down a job as an office boy at Qantas, (“They’d had an accident a couple of years before, and I didn’t think they’d last!”) Mellick worked at a hire purchase firm and joined a Signals cadet unit at Kelvin Grove Barracks at the age of 16. As war broke out, Mellick was made a second lieutenant, undertook advanced staff training at Duntroon in 1942 and transferred from Signals to Intelligence, serving in New Guinea. He described his five and a half years of war service as “a civilised prison. You went where you were sent, and you did what you were told.”

Mellick and his sweetheart Letty were introduced by a mutual friend in 1938. He decided not to marry during the war in case he was injured, but Letty had other ideas. “She was of a mind that it would be a good thing if we were married in December ’41. So what day did we choose? The day Japan bombed Pearl Harbour,” he said. Returning to civilian life in 1945, Mellick became a pharmacist, but later served in the Citizen Military Forces for 20 years, finishing as a Lieutenant Colonel training young officers for National Service.

“I addressed them along these lines, very simply: ‘I’m here because I hate war. Because I hate war, you will be efficient, because if you’re not efficient men will die.’ Being a pharmacist, my standards of hygiene were clearcut, too.”

In 1964, a recurring wartime illness forced Mellick to retire from retail pharmacy, giving him a chance to rekindle his love of English and start a third career.

Mellick says he was ‘infected with the poetic’ at Brisbane Grammar School. “My English master, ‘Dolly’ Dorfeld read one of Wordsworth’s poems to us and years later the images stayed with me,” he said. “I decided to read some of the books that I had never had a chance to explore, so I enrolled at UQ in Ancient History and first-year English.”

Letty, a musical composer, and his daughter Jill encouraged Mellick to do his PhD, and he eventually became a respected Senior English lecturer at UQ. He combined teaching with writing, publishing 40 poems and a book about the first Australian novel.

Mellick’s contribution to Australian Cultural Studies and his community work restoring St Paul’s Presbyterian Church in Spring Hill were recognised with an Order of Australia Medal in 2005. He also attended the opening of Le Havre University’s Pacific Studies Centre, which named the Stan Mellick room in his honour.

Having lived through many of the major events of the 20th century, Mellick continues to relish life and the new technology of the 21st. He remarried after Letty’s death, and wife Sally is helping him store a lifetime of photos in the Cloud.

“Being in Signals during the war, the advent of computers didn’t worry me,” Mellick said. “It’s important to stay in touch. I think a lot of older people could relate to the present era a little bit more closely. I think if they were more active they’d be a lot better off.”

When asked what interests him today, Mellick mentions a recent online article by English philosopher Roger Scruton (“You haven’t you heard of it? Google it.”) and says while he thinks the youth of today are “pretty terrific” he laments the loss of courtesy in modern life.

“When I was a boy, I was taught to stand up when a lady entered a room, I was taught to open a door for a lady, to walk on the outside in the street so they wouldn’t get splattered with mud. I still can’t see what’s wrong with those courtesies, to teach men subliminally to respect women. Under this new way of looking at things, I think a lot of blokes don’t know how to approach ladies these days.” Mellick laughs. “Me, I just stay old fashioned and I get on well.”

To discover more about Mellick’s fascinating life, visit the State Library website to watch the oral history he recorded in 2018.